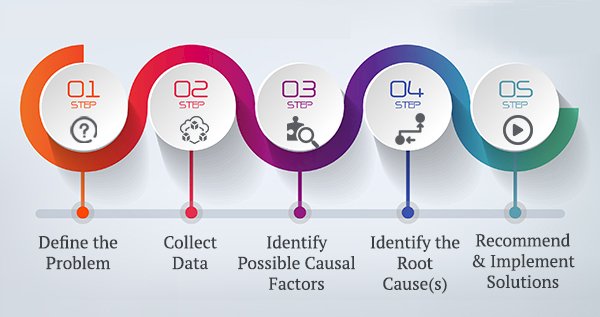 Understanding 5 Why Analysis is a very simple and yet a powerful tool which helps in arriving at a conclusion about why a particular problem is happening.

Root Cause Analysis is an important part of Six Sigma projects to know the reason behind problems or issues being faced by the company. It uses various tools and methods to know the causes behind the problems in the business. One of the most widely used tools for Root Cause Analysis is the 5 Why Analysis.
Understanding 5 Why Analysis is a very simple and yet a powerful tool which helps in arriving at a conclusion about why a particular problem is happening. It involves asking “Why” repeatedly till a satisfactory response is found. Theoretically, it involves asking the “Why” 5 times but practically, why can be asked any number of times till an acceptable answer is found. It may involve asking why ten times or even just 3 times also.
Let us understand its use by using an example. In a manufacturing company, it was found that delivery of finished products was getting repeatedly delayed to customers who led to an escalation and a delayed penalty being forced on the company. Hence, a meeting was called to know the reason behind the delays. Various department heads involved in the production and delivery were invited to the meeting. Meeting was started with the first Why being asked:

First Why: Why the goods are repeatedly delivered late to the customer”
Ans: Goods are received late from production, hence delivery got delayed.

Second Why: Why the goods are received late from Production?
Ans: Production cycle takes more time than planned which results in delay in Production.

Third Why: Why Production takes more time than planned as it is a continuous project running for many years and this problem was not faced earlier?
Ans: Production gets delayed due to frequent breakdown of conveyor belt. Repairing and restarting the conveyor belt again takes too much time which causes the delay

Fourth Why: Why conveyor belt breaks down regularly as this was not happening earlier?
Ans: Conveyor belt was replaced last year after which the problems have started. Regular maintenance is done still breakdowns do happen.

Fifth Why: Why the supplier which installed the conveyor belt is not called for explanation s earlier they visited promptly whenever the problem occurred?
Ans: The supplier is called but as he is a new supplier, he takes time to come.

Conclusion: As decision was made solely based on the cost and no input was taken of the Engineering and Production about the reliability and longevity of the new supplier’s product, the new supplier was given order. The final action that was taken was to change the process and final decision was given to the Engineering and Production Department about purchase of new machinery.

Congratulations to Ms Priya on her new assignment

How to gauge NPS - Process capability on Minitab

How to check process capability in minitab when data is discrete with data points,...

1 Proportion test is used to check the proportion of the population against a standard...

Another Question from Six Sigma DMAIC

Another Question from Six Sigma DMAIC