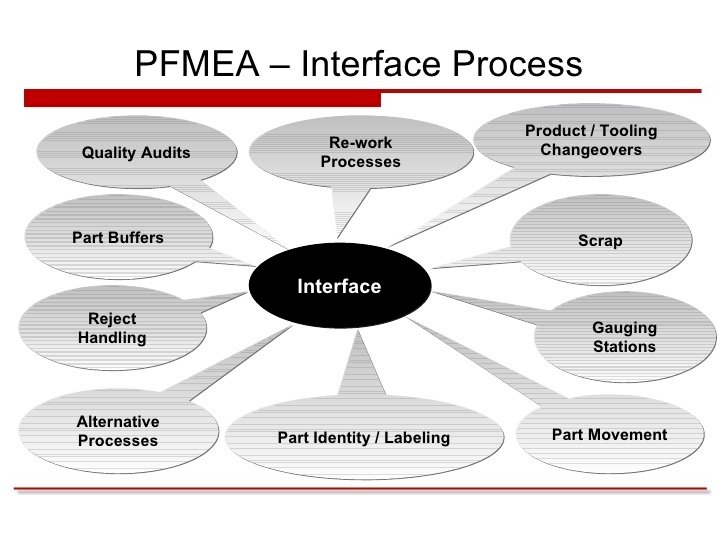 PFMEA means Process Failure Modes and Effects Analysis. Just like DFMEA is related to the Design FMEA of a product, PFMEA is related to the Process with which a product is manufactured or a service is delivered to the customer. The whole process and its major steps are reviewed thoroughly to identify the potential failure modes and to assess their impact. In comparison to DFMEA, PFMEA is relatively easier to prepare as the process is already functional and only its failure modes are being identified whereas in DFMEA, there is just a general understanding because even the design of the product/process is still to be finalized. PFMEA is a living document which is in use as long as the process is being used and is updated every time whenever the process is reviewed or changed.

1. Process Review: Firstly, a team has to be finalized and called for meeting. A brief overview of the process (using a flowchart) should be given in the start for those people who are unaware about the process and to refresh the knowledge of others. It can be followed by a brief session with the SME for clearing the doubts. Identify and document the major steps and their functions and links between them.

3. Effects of failure: Discuss the possible effects that may happen for every identified failure. The effects could be related to customers, environment, product, process, etc and should be described in such a way that it can be related easily to the process.

4. Giving Severity: Severity rankings are given on a scale of 1 to 10. They should be given very carefully as it helps in identify the criticality of the potential failure mode. Severity levels should be practiced in the same manner throughout the organization as it helps in easy understanding and co-relating.

5. Giving Occurrence rankings: It means the frequency with which the potential failure mode might happen. It is also given on a scale of 1 to 10. As most of the team members are familiar with the process, they are very well aware about which failure can often occur and which will rarely happen.

7. Calculate the RPN: RPN means the Risk Priority Number and is calculated by multiplying the Severity, Occurrence and Detection. It gives the risk ranking and helps in identifying the most critical failure modes. This helps in prioritizing the potential failure modes which should be tackled first.