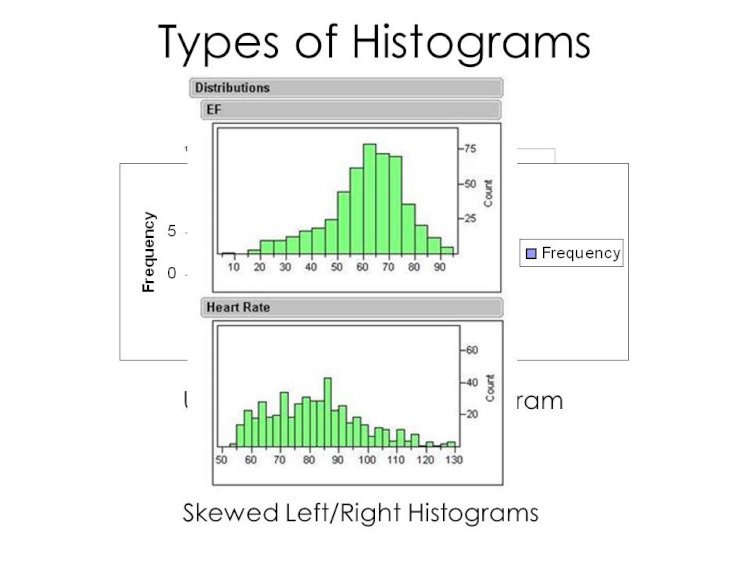 Normal Distribution: This is the best shape for a given data as data is evenly distributed on both sides of Mean. Data forms a bell shaped curve (as shown in the Empirical rule). This is the ideal state for a process to be present in but unfortunately, it is very seldom found.

In this distribution, peak of the data is on one side with tail stretching away from it. Skewness in data does not mean that the data is not correct or process is behaving erratically, such as, Quality data as good quality data will obviously be biased towards higher percentages. The histogram can be both left skewed or right skewed showing the place where majority of the data points are present.

This distribution is also known as Double-Peaked data (like a double humped camel). In this distribution, there are two peaks of data which shows the erratic performance of a process. It shows the wide variation in the performance of a process. But sometimes, data is also wrongly represented such as data of two shifts or two processes or two locations – such kind of data should be analyzed keeping in mind these conditions.

These histograms have more than two peaks which show the very high variation and inconsistent behavior of the process. Sometimes, it may also happen that data of multiple processes, multiple locations or multiple shifts are presented together which makes data analysis very complicated.

This distribution looks like a hair comb with consistent highs & lows occurring at regular intervals. There are multiple peaks occurring in the process displaying the high variation in the process. Making forecasts and predictions in such process is very difficult due to the very irregular occurring of data points.

This distribution has many peaks that show the consistent behavior of a process. It shows that the process behaves normally all the time with no single or double peaks visible in it. Such kind of conditions is generally seen in manufacturing industries where lot of machine action is involved.