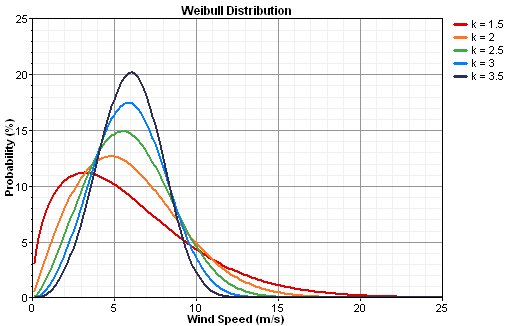 Commonly used to model time-to-failure data. For example, a manufacturer is interested in calculating the probability that a part fails after one, two, or more years. It has wide application in engineering, medical research, finance, and climatology.

Depending on the values of the parameters, the Weibull Distribution can take various shapes.

One of the main advantages of this distribution is that it can take on the characteristics of other types of distribution making it extremely flexible in fitting different kinds of data. For example,

When the shape parameter is 2, the Rayleigh distribution can be derived from the Weibull distribution.

The Weibull distribution is described by

Effect of the shape parameter

Effect of the scale parameter

The scale, or characteristic life, is the 63.2 percentile of the data. The scale defines the position of the Weibull curve relative to the threshold, which is analogous to the way the mean defines the position of a normal curve. A scale of 20, for example, indicates that 63.2% of the equipment will fail in the first 20 hours after the threshold time.

Effect of the threshold parameter

I have commenced project increase FCR in BPO. Can you help me out to identify the...

Weibull Distribution describe by Advance Innovation Group, it will help you to have...

VOC vs VOP. VOC generally means the Voice of Customer. It is a representation of...