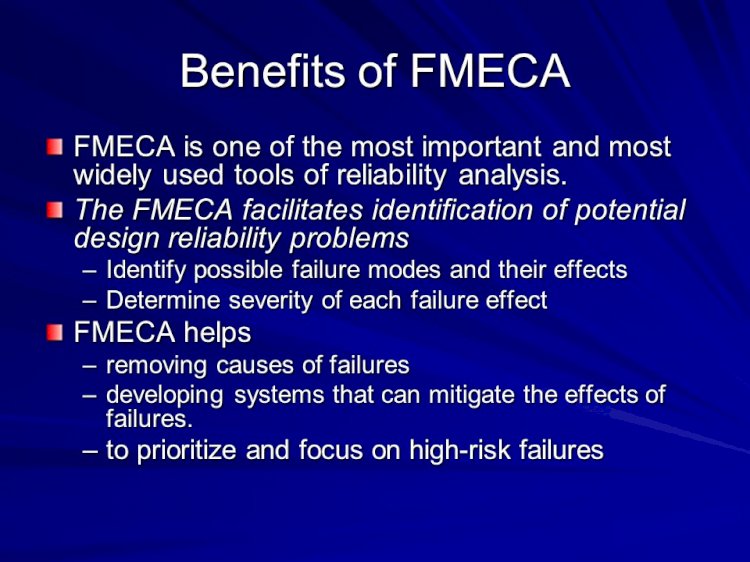 FMECA or Failure Modes, Effects and Criticality Analysis are a variant of FMEA which is generally used to identify the potential failure modes of very critical projects. FMECA is a highly disciplined method of assessing the potential risks associated with product or process performance. Customer expectations in relation to the product or process performance are given the utmost importance. It is generally used in defense and aerospace industries where both the products and processes tend to be highly complex and technical.

A FMECA is created just like a FMEA where the identified potential risks are given Severity, Occurrence and Detection ratings. But what sets the FMECA apart from a regular FMEA is the concept of Criticality which is related with each risk while the ratings are given. What is the importance of Criticality in FMECA? Unlike FMEA where only major parts of a process or a product are analyzed for potential failure modes, in FMECA even the most minor parts are thoroughly analyzed due to the criticality of the product or process. Any loose ends or loopholes may cause massive losses in terms of both millions of dollars or lives of people or both. For e.g., imagine a scenario where a FMECA of a new fighter jet or a space shuttle is being made. This is why the concept of Criticality is so important while giving the ratings of each potential failure.

FMECA is a very effective predictive tool which can be used to deal with the potential failure modes by making the process robust by incorporating in-built test and defect indicators whenever any defect occurs. SPC and other mistake signaling techniques can be used to design diagnostic tools to quickly identify defects and reflect them in the process metrics or performance tables. Preventive maintenance of equipment can be planned in advance to ensure that proper upkeep and calibration of the equipment is done.

FMECA also makes the process more effective by indentifying the key areas in the process which are vital to its functioning and placing appropriate controls and inspection methods to monitor their functioning. As each and every part of the product or process is carefully scrutinized, it helps in performing a detailed scientific analysis of the process and helps in identifying areas of improvement.

A carefully conducted FMECA leads to more cooperation between the designer of the product or process and the people who are going to actually produce it. There is huge knowledge gain about the process which may lead to reduction in time between the designing and production stage for new products, leading to reduction in the cost of development. Also, lessons learnt from its formulation may be used in other parts of the organization where similar products or process exists.

The concept of Criticality in FMECA while giving the Severity, Occurrence and Detection ratings helps in identifying the potential failure modes which may prove fatal if left undetected. For e.g., The difference between the failure of a car and a fighter plane may seem to be similar. But what sets them apart is that while a car will cost just a few thousand dollars; the cost of the fighter plane would be in millions of dollars or even more with an added risk of the life of the pilot.

Congratulations to Ran Singh on his new assignment

Congratulations to Ran Singh on his new assignment

Fresher Hiring Be / B - Tech For HCL

Fresher Hiring Be / B - Tech For HCL