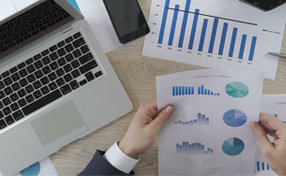 1 Sample T test is used to verify if the process is having any centering related problems. It is a Mean based test where Y is continuous and X is Discreet.

1 Sample T test is used to verify if the process is having any centering related problems. It is a Mean based test where Y is continuous and X is Discreet. It is also used to calculate the baseline of Y and comparing the mean to a target value. Navigation -> Stat – Basis Stats – 1-sample t • Select a Continuous value(Y) from the available fields and press “Ok” 1 The following result appears in session window: One-Sample T: Production (Kg) Variable N Mean StDev SE Mean 95% CI Production(Kg) 208 271.71 37.56 2.60 (266.57, 276.84) N – No of data points Mean – Mean of sample data St Dev – Standard Deviation of data SE Mean – Standard Error of Mean shows the accuracy of the mean estimate 95% CI – Confidence Interval of Population Mean with 95% probability. Base lining of process The CI given above also helps in the base lining of the process as it predicts the Mean range of the population data with 95% probability by calculating the Mean of the sample data. Minitab allows us to make this probability more stringent by giving a more narrow probability value, for eg. 99% which will again give us another CI range but now with more strict probability. Comparison with standard We can also compare our data against a standard or target by selecting the “Perform Hypothesis Test” and giving a “Hypothesis Mean “ value, for eg, 250(see image above) One-Sample T: Production(Kg) Test of mu = 250 vs. not = 250 Variable N Mean StDev SE Mean 95% CI T P Production(Kg) 208 271.71 37.56 2.60 (266.57, 276.84) 8.33 0.000 T – Helps in determination of P-value for T-test P – P-value < 0.05 Alternate is true .i.e., Mean is not equal to target or standard P-value ≤ 0.05 Null is true, i.e., Mean is equal to standard or target Another way to understand this is as follows: • If Population Mean is equal to Hypothesis Mean , then Null is True • If Population Mean is not equal to Hypothesis Mean, then Alternative is True • If Population Mean is less than Hypothesis Mean, then Alternative is True • If Population Mean is Greater than Hypothesis Mean, then Alternative is True Other Options 1. There are several other options in Minitab for data analysis through 1 Sample T. We can give specific values also such as Mean, sample count and SD 2. As mentioned earlier, we can change the P-value also in Minitab present in the “Options”. It also has 3 options for Alternate: a. Less Than: Gives the upper limit of the CI b. Not Equal: Default option. Gives the CI c. Greater Than: Gives the lower limit of the CI These options can also be used by changing the 95% probability value of the CI and by comparing it against a target value 2 Graphical Representation The output numerical data can also be represented in graphical manner. Minitab gives 3 options – we can use either one of them and even all of them also: • Histogram • Individual value plot • Boxplot

In ISO 9000, QMS audits we need to follow the mandatory records in the time of implementation...